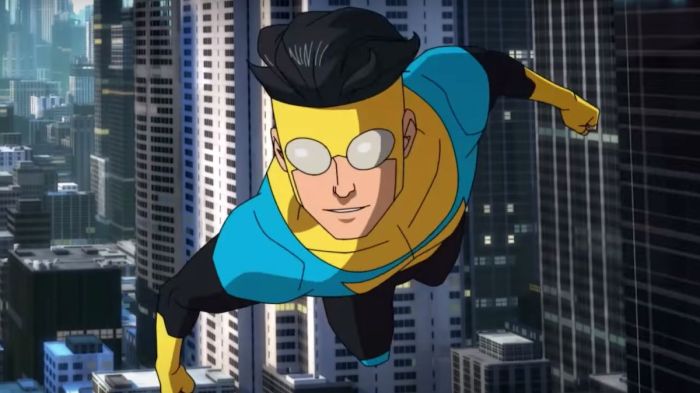 A Spoiler-Free review of “Invincible”

Long time, no type for this reviewer. But, here I am again to delight with the written word on what is perhaps one of the best animated shows on television. Being an AMAZON ORIGINAL and having characters voiced by the like of Steven Yeun, Sandra Oh, and J.K. Simmons, there really was no doubt that this show would knock it out of the park. I won’t go into spoiler territory, but I will say that you need to watch this as soon as possible before it is spoiled by the likes of twitter (To be honest, one of the main reasons I started watching was because of some twitter hype of a certain scene that happens towards the end episodes). Although I have never read the comic by Robert Kirkman, from what I have heard, it is very close to the source material (And the first season only gets through like 1/4th of it. Two new seasons have already been requested from Amazon, so yay).

To give a gist of what the show is, let’s just say it revolves around the Grayson family with Mark Grayson (voiced by Steven Yeun) being our young teenage protaganist whose world is flipped upside down once he gains super powers that are akin to Superman in the DC universe. (The boy just wants to date and that’s very difficult to do when you have a side hustle of saving the distressed and beating up monsters). These powers of course being passed down from his father, Nolan Grayson aka Omni-Man, an alien from the planet Viltrum (voiced by J.K. Simmons) who had come to Earth, over 20 years before the start of our story, and who met Debbie Grayson (voiced by Sandra Oh) eventually marrying and starting a family.

I don’t want to go into the story much more than that, but I will say that this is a brutal show. It is very action-oriented with a great deal of violence being portrayed throughout every episode. This is not a superhero show for small children. Along with fantastic animation and a story that makes you stick to the edge of your seat, the character design along with the amount of characters we get to see is quite extraordinary as compared to other comic book adaptations, be it movies or shows, where the amount of heroes and villains is dependent on the budget (look no further than the original Deadpool movie with Ryan Reynolds throwing quite a few jokes at this). Robert Kirkman has built quite the world with this and it is a definite watch for both fans of INVINCIBLE and those who just love comics and/or good storytelling. Give it a watch before it’s spoiled for you. – YoungYoda

Subscribe to receive notifications of when posts go live! Keep up to date with us one email at a time!